Top Corporations, Major Cities Launch Partnership with Civil Rights Leaders and Equality Advocates to Reinforce Commitment That Businesses Should be "Open to All" - Open to All

Top Corporations, Major Cities Launch Partnership with Civil Rights Leaders and Equality Advocates to Reinforce Commitment That Businesses Should be “Open to All”

Washington, D.C. July 31, 2018—Today, some of the nation’s largest businesses including Yelp, Levi Strauss & Co., Airbnb, Lyft, and Thumbtack, as well as the cities of New York and Oakland, are joining forces with more than 1,200 small businesses, and more than 190 organizations (representing a cross-section of perspectives and interests including civil rights, racial justice, LGBT equality, health and disability rights, and faith causes) to launch a partnership with the Open to All® Coalition and kickoff a new nationwide initiative focused on encouraging businesses large and small to join together, to declare that they are “open to all,” and to reinforce their commitment to longstanding principles that affirm when a business opens its doors to the public, it should be open to everyone on the same terms. The launch of the partnership comes in the wake of the Supreme Court’s narrow ruling in Masterpiece Cakeshop v. Colorado Civil Rights Commission, involving a Colorado bakery that refused service to a same-sex couple—in violation of the state’s nondiscrimination law—which did not address the discrimination that millions of Americans still face.

“As a nation, we decided long ago that when a business opens its doors to the public, it should be open to all,” said Calla Rongerude, campaign manager of Open to All®. “So, it’s shocking that many people of color, LGBT people, people of minority faiths, and many others still can’t be sure they won’t be discriminated against when they seek goods or services from businesses in their local communities. No one should have to worry about whether they will be denied service or face hostility as they go about their daily lives, simply because of who they are.”

Participating businesses can show their support for “Open to All” in several different ways. One of these ways is with Yelp—the company that connects people with great local businesses—which is introducing the “Open to All” attribute allowing businesses to distinguish themselves as a safe and welcoming place to everyone, regardless of race, ethnicity, national origin, sex, sexual orientation, gender identity and expression, religion or disability.

The new feature makes it easier for consumers across the country to identify and support businesses who are committed to welcoming all. The new attribute also gives businesses a way to express their support for the Open to All® movement and affirm their commitment to opposing discrimination and serving everyone on equal terms.

“No matter their identity, people should be able to live with dignity and feel free to eat, shop, and gather in public spaces without fear of being turned away because of who they are,” said Sherrilyn Ifill, President and Director-Counsel of the NAACP Legal Defense and Educational Fund, Inc. “The reality is that most Black Americans regularly face the indignities of being treated with suspicion, asked to pre-pay for service or denied service altogether, or told they cannot use a store bathroom. Federal law already prevents this type of discrimination in public places, but this initiative led by the Open to All® Coalition is the kind of broad and diverse partnership of individuals, groups, small businesses and large corporations needed to send a powerful message that there is no room in our society for bias or discrimination. More importantly, it will foster communities where individuals do not have to question whether they’re welcome.”

CITIES AND SMALL BUSINESSES ENLIST IN THE NATIONWIDE INITIATIVE

New York City Comptroller Scott Stringer, Mayor Libby Schaaf of Oakland and the mayors of Bloomington, IL, Durham, NC, Alexandria, VA, Madison, WI and more, also officially announced their commitment to the Open to All® campaign, and called on other cities across the nation—big and small—to enlist in the effort to enact and affirm laws and policies that prohibit discrimination in employment, housing and public accommodations like stores and restaurants. New York City Comptroller Scott Stringer, the chief financial officer of the largest city in the country, will lead a national taskforce of public officials called Local Electeds Against Discrimination (LEAD), committed to engaging business and community leaders in building “Open to All” cities, including the development of a toolkit of model nondiscrimination policies. For a full list of city leader support, visit www.OpenToAll.com/supporters.

“Diversity is a city’s greatest asset and putting policies in place to fight discrimination moves us one step closer to becoming a more just, thriving country,” said New York City Comptroller Scott M. Stringer. “An injustice to one is an injustice to all, and it is a moral imperative that government leaders protect every community – no matter who they are, who they worship, or who they love. That’s why I am proud to join the Open to All® coalition and look forward to working with city officials across the United States to ensure that businesses in every corner of our nation are open to all.”

Small businesses are leading the effort as well, with more than 1,200 small businesses having committed to the campaign prior to launch—among them, is Tia Agnew, co-founder and CEO of the Indianapolis-based New Day Craft.

The Open to All® campaign represents one of the most significant efforts to date to unite and galvanize national leaders in business, civic engagement, and advocacy to take a stand for shared American values of fairness and equality.

The Open to All® coalition consists of more than 190 civil rights and racial justice organizations; lesbian, gay bisexual, transgender (LGBT) equality organizations and community centers; health, labor and disability organizations; and faith organizations committed to building awareness and understanding about the importance of our nation’s fundamental values around nondiscrimination—and to defend the bedrock principle that when businesses open their doors to the public, they should be Open to All®.

“We are grateful to Yelp for recognizing that America is at its best when we are Open to All®. Business owners from coast to coast are committed to keeping their businesses open to all, and now they have a unique opportunity to demonstrate that – thanks to a new partnership with Yelp,” said Masen Davis, CEO of Freedom for All Americans. “The vast majority of small business owners agree that serving all customers equally is good for business and builds thriving communities. Freedom for All Americans is proud to be part of the Open to All® Coalition as we work together to ensure that all Americans are free from discrimination, no matter what city or town they call home.”

Open to All® was originally launched in November 2017. Initially, the campaign was focused on educating the public about the need for nondiscrimination protections amid oral arguments in the Masterpiece Cakeshop v. Colorado Civil Rights Commission case before the U.S. Supreme Court. Today’s new partnership represents a dramatic expansion of that effort, encouraging businesses large and small across the country to publicly and visibly declare that they support nondiscrimination and that they are open to all.

The newly revamped website features an Open to All® business page so that business owners can sign the Open to All® business pledge, order window signing, and learn about the new Yelp attribute. Advocates and individuals can use the site to spread the word through innovative social media shareables, watch videos, order window signing to share with local businesses in their communities, and much more.

For more information about the Open to All® coalition, or today’s announcement, please visit www.OpenToAll.com. 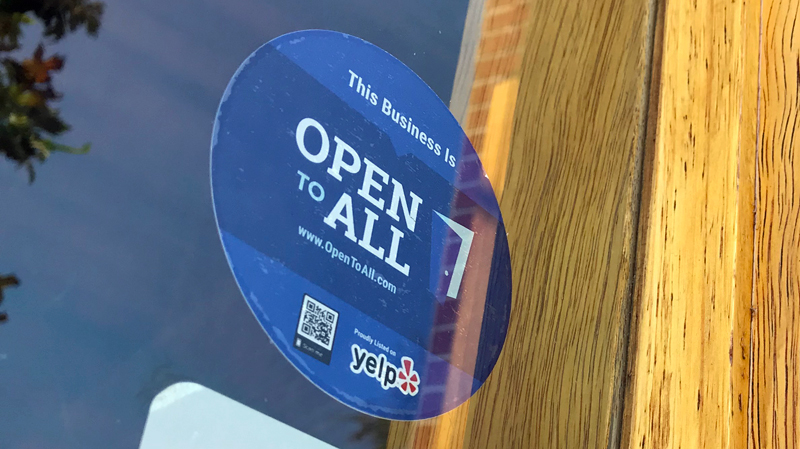 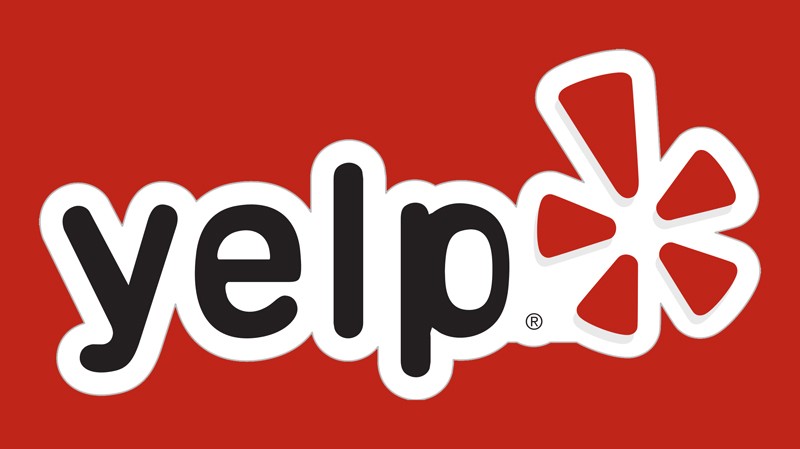 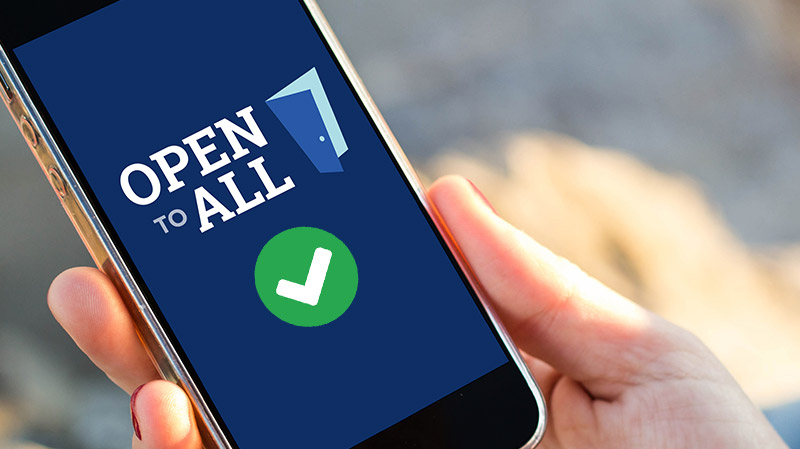 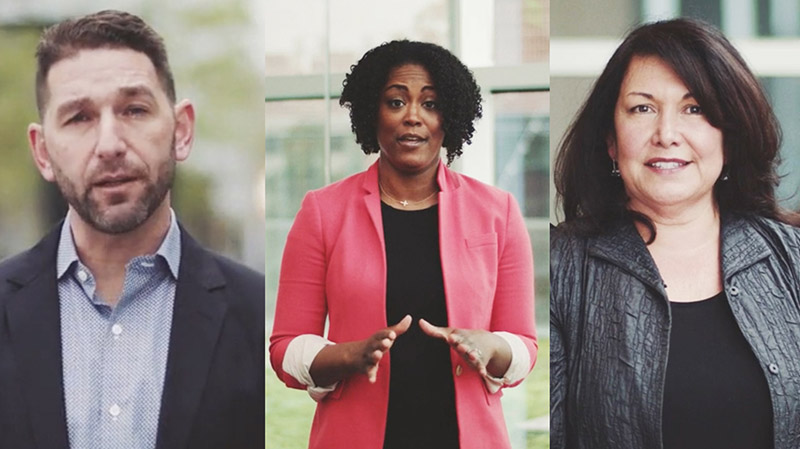